The natural treatment of infections is as good in horses as in anyone. I had a worrying 24 hours some time ago. When I went out to feed my horses one evening, one was down. I’d noticed vaguely earlier in the day that he seemed a bit under the weather, but then dismissed it when he started grazing. 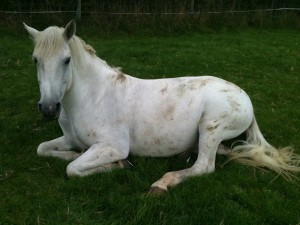 He showed no inclination to get up, and occasionally lay down flat, then ‘sat’ up. He wasn’t interested in eating his meal, which was highly unusual.

Although I couldn’t discount colic, it wasn’t likely. Sand colic can occur at this time of year, but I use psyllium husk and linseed in their daily feed. Colic from stress (the most common form of colic) had to be ruled out as there had been no deviation from the routine of a normal and relaxed way of life. Colic from overfeeding was a possibility, with the new grass, but not likely. And in all my years with horses, I have never had one with colic.

Initially I started on a remedy that sprang to mind because of other past problems he’d had. Within half an hour, he had got up and wandered off to get a drink. He still wasn’t interested in food. Still, possibly that would come.

I kept dosing with the same remedy for a couple more hours, as he seemed marginally better. But it didn’t hold. I’d often find him down, with an increased breathing rate.

So I dosed for colic just in case. He didn’t like the remedies and there was no change. At about 11.30 that night, he finally got up and wandered off to nibble on some sedge. I decided I could get some sleep at this point, that he would be OK for the night.

Early the next morning, I found him down again. At this point, I would like to say that I never like to interfere with what an animal does naturally. I know some people think a horse should always remain standing, especially with colic. I strongly disagree with this idea, which discounts all wisdom the horse has of their own condition.

I know animals know what they want. So I use how they act as the basis of my treatment. I work with them and their natural inclinations, not against them.

A little later on, he got up and remained up all day. There seemed to be a problem at night. Or possibly the chill of the evening, night and early morning was a problem for him. Although his ears were warm (a good way to check body temperature), he could still have an aggravation in cooler weather.

I noted a few other strong symptoms. He stood in a mild urinating position, indicating a possibility with his renal system. So I changed the treatment to include this, to no avail. He found it difficult to support his weight on his back legs, constantly shifting from one to the other, every few seconds. I didn’t know what to do with that symptom, other than it may have confirmed the renal connection.

At some stage during the day, I suddenly got a whiff from his mouth – highly offensive smell. THAT was something I could work with.

I changed the treatment again. Progress was a little slow so I did change the treatment, but reverted back when things deteriorated. Over several doses and hours, he gradually improved. He did go down again at about 4 in the afternoon, but after another dose, he seemed ravenous, grazing while he lay. Then he consumed a bucket of chaff. That was a great sign. Return of appetite is one of the strongest indications of real improvement.

A little later he was up, went for a drink and remained up thereafter. He was better each time I went to see him after that and in the morning was grazing normally, with an almost normal breathing rate and no odour from his mouth.

I continued treatment over the next couple of days to ensure all the healing was complete. Without access to subjective symptoms, it’s best to keep going for a little time after a full recovery is apparent.

I can’t tell you the label of the problem he had, as homeopaths don’t work that way. But I can tell you that the treatment that worked for him is one which we give for septicemia or blood poisoning. He wouldn’t eat because he was seriously ill, not because of colic. He was down because he had no energy.

The smell could have indicated a tooth problem, a stomach problem or something else entirely. It didn’t matter because the treatment covered this. His problem, whatever it was, had suddenly deteriorated to become a systemic problem, hence the renal connection.

Obviously it was an infection. But treating the infection alone does not get to the cause. Appropriate homeopathic treatment eliminates the effect, the infection, because it resolves the cause.

Treating animals can be hard, as homeopaths rely on subjective symptoms and animals only give us objective symptoms. But, if you remain calm, focussed and observe everything about their behaviour, you can achieve great results.

Some people say homeopathy is rather slow to work. From the start of the appropriate treatment to when he was eating again took about 6 hours. And that included a deviation. Is this slow? In my experience, the homeopathic treatment of infections is far faster than anything else.

Here you can find out more about homeopathic treatment.

The Path of The Horse

The Path of The Horse