In today’s guest article, the importance of a healthy soil is discussed. Even if your horse is stabled, the food you feed them must still come from healthy soil, if it is to meet all their nutritional requirements. 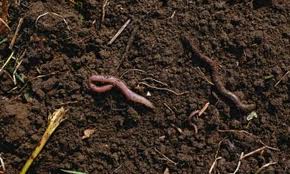 Most of us don’t realise it, but the soil beneath our feet is a veritable treasure trove of life; just one teaspoon of soil can harbour millions of organisms. What’s more, soil provides us with a range of vital services, including climate regulation and flood prevention. Yet even as scientists get to grips with the incredible diversity and functions of soil life, threats like erosion, pollution and urbanisation are damaging this vital resource.

The European Commission’s Joint Research Centre (JRC) is working hard to raise awareness of the importance of soil and provide policy makers with sound scientific advice on how best to protect it. On 15 February it organised a session on soil biodiversity at the prestigious Annual Meeting of the American Association for the Advancement of Science (AAAS). Dr Arwyn Jones, who helped to organise the session, has been working on soil science with the JRC for over a decade.

In an interview with CORDIS News, he explained that scientists are only just beginning to understand how much life there is in the soil. ‘When people talk about soil biology, the first things that come to mind are either moles or earthworms because that’s what they can see, but actually soil is quite a complex food web and the moles and earthworms are simply the top of the chain,’ he said. Beneath them is a complex web of bacteria, fungi, minute creatures, insects, snails and other organisms, many of which can only be seen with the aid of a microscope.

‘Current knowledge is very limited for most [soil] species,’ commented Dr Jones. Among other things, we lack information on their distribution in the soil, their functions, how they interact with one another and how they respond to environmental pressures.

Soil’s amazing biodiversity is behind the many ecosystem services it provides, such as nutrient cycling, as Dr Jones explained: ‘When vegetation falls on the surface of the soil, microbes and fungi and earthworms pull the material into the soil and break it down to make the nutrients available for the roots of the plants.’

Soil also acts as a sponge, absorbing rainfall and releasing it slowly into rivers and aquifers. ‘If you start covering up the soil, you stop this absorption function and you get sudden surges of water into rivers which then causes floods,’ warned Dr Jones.

Crucially, soil is increasingly being recognised as a major player in climate regulation. ‘Soil acts like a big sink for carbon dioxide; organisms in the ground take the carbon dioxide out of the atmosphere and store it in the soil, so if you have healthy soil you can actually use it as a reservoir of carbon dioxide,’ Dr Jones noted: ‘People put a lot of attention on preserving forests as a way of storing carbon, but if you look at the global picture there’s between three and four times more carbon stored underground in soil than in vegetation.’

Unfortunately, soil is under threat on a number of fronts. In many areas, poor land management practices cause the soil to be blown or washed away. Another problem is pollution; many contaminants are toxic to the organisms living in the soil.

Urbanisation is another growing threat to our soils; as tarmac and concrete are laid, the soil is effectively sealed off from the rest of the environment. ‘If you seal the soil, you’re denying the environment the contribution of that soil to the ecosystem,’ Dr Jones pointed out. ‘And of course if you seal the soil, you’re also potentially killing all the biology that lives in the soil.’

One of the biggest problems is a loss of the organic matter in soil. Changing land use and certain intensive farming practices can lead to a reduction in organic matter, and soils with low levels function less efficiently than those rich in organic matter.

The EU is taking action to protect our soils; there is a Thematic Strategy for Soil Protection and a soil protection directive has been proposed by the European Commission. The JRC is providing policy makers with the scientific advice they need to develop sound policy that will keep our soils healthy and productive long into the future.

‘While people are aware of legislation on air quality or water quality, soil protection hasn’t been given the same priority in the past,’ concluded Dr Jones. ‘Now there’s a growing realisation of the crucial ecological services that soil provides us with, and the key driver for a lot of these services is the biology that lives in the soil. If we’re not careful, we risk destroying the biology, in which case you destroy the soil and how it functions.’

Soil research at the JRC

One of the best approaches is to nurture your soil with organic fertilisers. Give those chemical fertilisers and pesticides a miss. Don’t overgraze and ensure you have plenty of weeds in the pasture. Weeds naturally fertiliser the soil as they are not eaten, so break down as next year’s fertilisers. Meanwhile the use of homeopathy is the natural and effective alternative to mainstream veterinary care.

Horses, Expectations and Changing The World

Horses, Expectations and Changing The World

Long-term stabling is no life for a horse

Long-term stabling is no life for a horse